Identification And Elimination: Finding The Source Of Defects In Plastics 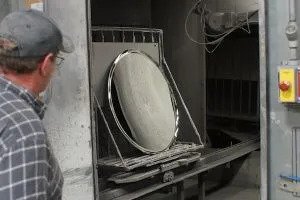 Those of us in plastics manufacturing know to keep an eye on products throughout the entire production timeline. Consistency and continuity in quality control is the key to identifying and remedying errors and defects in an accurate, timely fashion. When a defect appears, it can almost always be traced back to a problem in one of four categories:

Finding the source of the problem is often as simple—or complicated—as ruling out the other possibilities.

Defect: There Are Spots On A Finished Mirror

Let’s say an operator flags a product because it contains a spot or an internal smudge. Finding the cause becomes the priority so the problem can be eliminated at the root and prevented in the future. To determine the source of the defect we ask a few questions:

Process Of Elimination: Identifying The Potential Cause Of The Defect

Now it’s time to examine the defect to identify the source—or at least to rule out incorrect potential culprits. If a fingerprint can be seen in the spot, for example, it can be said with relative certainty that it was human error. On the other hand, suppose a dome is shaped incorrectly. Perhaps the material was too thick on one side, as is commonly the case in cell-cast acrylics. If thickness measurement with a micrometer rules out that possibility, most likely it was formed too hot or the forming temperature was inconsistent from one side of the part to the other.

Experimental validation of the root cause is sometimes warranted so as to ensure the root cause has been identified, even if the experiment results in parts with intentional defects. Sometimes it is beneficial to push the process to exaggerate defects so as to demonstrate conclusively the cause-effect relationship between the hypothetical root cause and the defect.

For instance, if a manufacturer suspects a flaw in the raw material, it can run the same sheet on a different tool to see if the same defect appears in a totally different part. Or the operator may repeat the original process on the same machines run by the same people, but using material from a different shipment. If the problem goes away, that is strong indication they’ve found their culprit and can quarantine that pallet. If the material is not the root cause, the operator could alter the machine settings or even take the tool out of the suspect machine and put it in a different machine to see if the issue is mechanical.

In general if the defect occurs in a precise repetitive pattern, the details and nature of that pattern act as signposts leading a skilled operator to identify the root cause. The most challenging problems to solve at the root cause level are problems that are intermittent and not repetitive in nature.

Vigilance is the key to spotting the source of defects in plastics. When a defect is spotted, finding out what isn’t responsible is often the most logical path to finding out what went wrong. Monitoring and looking for potential problems throughout the process from start to finish is the backbone of quality control.