From Clear to Shiny: The Incredible Science of Vacuum Metallization 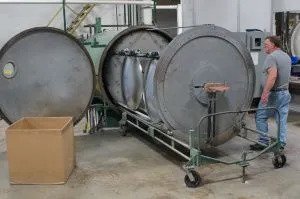 Coating a sheet of plastic with a thin, even layer of metal is no easy task—but without this step, a mirror is not a mirror. Laboratory science and precision manufacturing must converge to send acrylic or polycarbonate and aluminum on a remarkable journey that ends in the creation of the finest reflective surfaces in the world.

Metallization starts by putting a sheet of raw plastic called substrate into a vacuum chamber on a fixture that is aligned facing a metal source. When the operator closes the chamber door and engages the machine, a chain reaction of manufacturing magic is set in motion.

Large pumps go through a complicated cycle to remove all the air from the chamber very quickly, taking the chamber from normal atmospheric pressure to a near-total vacuum. Like the rockets that propelled the early manned space flights, the pumping cycle goes through three successive phases:

Molten Metal and the Journey of Aluminum Gas Through Empty Space

When the pumping is achieved, the amount of residual gas remaining in the chamber is so minute that air molecules bump into the walls of the vacuum chamber more than they bump into each other. Only then can the next stage begin: heating filaments until they glow like light bulbs—if those light bulbs were really, really big.

As the filaments heat up, aluminum melts onto high temperature metallic filaments. After changing from solid to liquid, the molten aluminum actually travels along the filament like wax moving up and down the wick of a candle until the filament is coated. It’s an extraordinary process that you can actually see taking place through the view port in the vacuum chamber. From there, the heat is increased even further until the molten, liquid aluminum becomes so hot that it evaporates and becomes a gas.

The gaseous aluminum then travels across the empty space inside the chamber until it lands on the first thing it encounters. Had the chamber not been voided of air, it would encounter oxygen molecules and become aluminum oxide, but now the only thing in its path is the plastic substrate. Upon contact, it instantly cools to room temperature and is deposited on the substrate, one single atom at a time. Crystals of metallic aluminum grow on the substrate to a thickness of between 100 and 1,000 nanometers.

A nanometer is one-billionth of a meter.

The filaments are then turned off and air is released back into the chamber. Without air, the chamber door could never be opened against the 267,000 Newtons (60,000 pounds of force) applied by atmospheric pressure pressing against its heavy, steel door.

When the cart is pulled out of the chamber, the parts that went in clear, come out shiny—completely and evenly coated in a remarkably thin and uniform layer of metal.