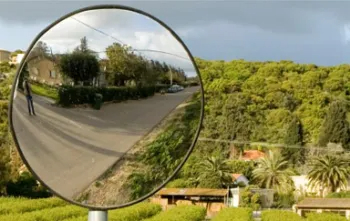 Mirrors may come in a range of shapes, curvatures and sizes and they are furthermore distinguished as either first-surface or second-surface mirrors. Knowing the difference between the two, and understanding their different applications, is vital to choosing the right mirror.

The Difference Between First and Second Surface Mirrors

First-surface mirrors are reflective on the front. Light hits the mirrored surface, bounces off, and your eye picks up the image. A good example of a first surface mirror is polished stainless steel. Usually first surface mirrors also have a very thin (often under 1 micron thick) protective clear coating on top of the metal layer. With second-surface mirrors, there is a very thick (typically 1 – 6 mm) layer of clear material in front of the reflective surface, called a substrate. With these mirrors, light travels through the substrate twice — first on its way to the reflective surface, and then again on its way back after it is reflected. This substrate is usually glass, acrylic, or polycarbonate. On second-surface mirrors there will always be a primary image which is probably at 85% reflectance.

When Do You Want a Second-Surface Mirror?

Because of the thick layer of clear material in front of the reflective surface, second-surface mirrors are typically much more durable. The overwhelming majority of common bathroom mirrors, for example, are second-surface mirrors. If glass cleaner is sprayed on and then wiped off with a paper towel, the reflective material itself (which is a thin, delicate layer of metal) isn’t attacked because the cleaner and paper towel only touch the substrate, never the reflective surface. Of course second surface mirrors can be chemically attacked from the back side or from the edge.

The Price of Durability

The trade-off for better durability is a slight optical drawback. Second-surface mirrors produce two images. Since the human brain grabs the much more powerful image produced by the mirror (about 20x stronger) and discards the much weaker front surface reflection, the duplicate reflection is usually not discernible — unless someone writes on the mirror with a marker and the observer views the mark at an oblique angle. The duplication can be reduced somewhat by using a thinner material, but would get even worse if the material was thicker.

When Do You Want a First-Surface Mirror?

Although the double image is imperceptible in most cases, there are certain situations where even a faint second reflection is unacceptable. In these cases, first-surface mirrors are preferable.

First-surface mirrors are most frequently used in technical applications such as in cameras — especially where signal processing is used — in aircraft and flight simulators, as well as in image projection equipment. Unfortunately (for them, at least) these machines don’t have brains that automatically discard the weaker frontal image.

The Price of Image Precision

In addition to reduced durability, the second drawback of first-surface mirrors is their cost. Because of the specialized work involved with applying the thin (and expensive) protective coating, the price is prohibitive for most consumers.

The vast majority of mirrors produced are second-surface mirrors. All of the familiar mirrors — from safety mirrors to bathroom mirrors— are usually of this less-expensive, more-durable variety. Expensive protective coatings jack up the price of first-surface mirrors, but in the technical applications for which they’re designed, nothing less will suffice.