Baptism by Fire: How a Disaster Strengthened a Business and a Community 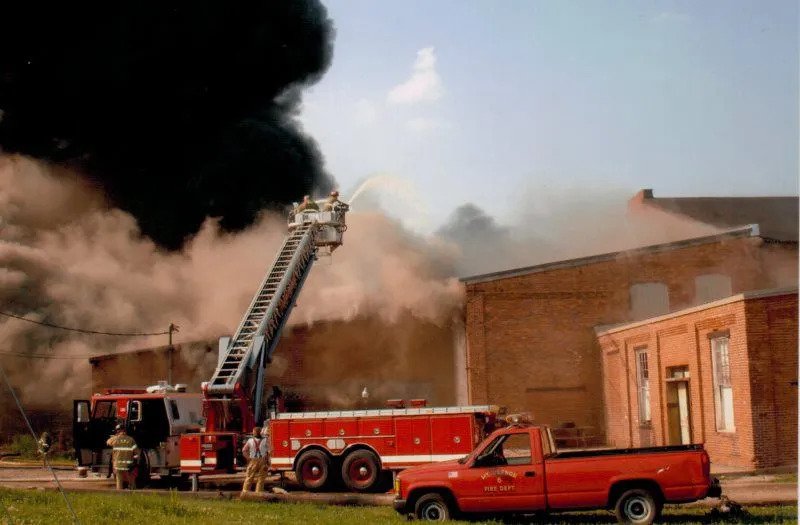 On Memorial Day 2006, Margaret Hampton was on her way to get picnic supplies for holiday festivities in the town of Mt. Vernon, Ohio, when she saw thick, black smoke belching into the sky a short distance away. Just minutes from her home, she drove toward the inferno. The closer she got, the greater her fears became that the center of the disaster was Replex Plastics.

At the same time, in another part of town, those fears were confirmed for Tammy Cochran — another Replex employee — by the local television news.

A ferocious fire — set by two teenage arsonists who were quickly arrested — was devouring not just the facility where they worked, but the tools, equipment, machines, storage, records, materials, and hardware within. In less than eight hours, a thriving business and mainstay of the community was a smouldering heap of ruins.

Frantic employees began calling each other and trying to figure out what was happening — and what to do next. Replex employee Herman Trammel — who could almost see the smoke from his house — raced down to the plant to move a company truck to which he had the keys.

“Nobody was sure of what was going to take place next,” Margaret says. “It was pretty horrific.”

“Where do you go from there, when you have a fire like that? That’s your work, your job, your life,” Herman says.

But like metal strengthened in the flames of a blacksmith’s hearth, the values of Replex were forged in that fire.

The day after the catastrophe, the company held a meeting in the only building that wasn’t completely destroyed.

Every employee showed up.

Emotions were running high. “He had tears in his eyes when he talked to us,” Tammy says of company founder and owner Mark Schuetz. “I’ll never forget that.” But if the business was going to be salvaged, time was not on their side. The Replex family simply didn’t have the luxury of mourning.

Within two or three days, the staff formed an impromptu disaster-recovery team. The team worked from 7 a.m. until 11 p.m. every day. They ate, slept, worked — and did little else.

Then one day at lunchtime, food that no one had ordered suddenly just showed up. Then again the next day. And the next.

Unbeknownst to Replex, the Chamber of Commerce had rallied local restaurants to pitch in to feed the beleaguered team.

Soon, so much food had been donated that they couldn’t possibly eat it all. Just when they began wondering what to do with the excess, someone delivered a giant refrigerator for them to store the leftovers.

But the extraordinary gestures of kindness and community displayed by the people and businesses of the Mt. Vernon community didn’t stop with creature comforts.

With all three of their crucial CNC routers lost to the flames, there was simply no way to get things rolling again. Then the owner of a local print shop turned over the keys to his building so Replex employees could use his router whenever it wasn’t needed for his own business.

Customers, too, suffered through it with them. A year later, when business was back up and running, every single one of their prior customers had returned.

From the moment the flames were extinguished, the mammoth task of rebuilding began. Although the town and its business community pitched in with remarkable acts of kindness and support (not to mention a whole lot of really good food), the Replex workers bore the brunt of the burden — and bear it they did.

From salvaging machinery to working in other facilities to gathering the mountains of documentation needed for insurance companies, not a single Replex employee lost a single day of work.

A year later, Replex celebrated its “re-birthday” party, and from the ashes emerged a new business — one that had literally undergone a trial by fire. It was no longer a business, however, but a family with a renewed sense of purpose.

A sense of purpose not only to each other, but to the community it had leaned on during its most desperate time, and to the customers who never abandoned them.