Adapt or Die: How Procedural Evolution Can Open Up New Markets 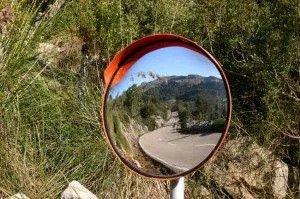 Over the course of 20 years, American plastics mirror manufacturing processes have developed for the typical customer in the North American market. Curvature, size range, and materials of construction had fallen into a rhythmic pattern — and then along came the era of international trade.

Suddenly, like water being poured into different vessels, plastics manufacturers hoping to expand globally have had to adapt products to meet a new set of standards.

For example, European requirements are very different than those in the U.S. First of all, roadways in Europe are equipped with roadway mirrors, something that would be mostly foreign to American drivers.

If you put a curved mirror roadside so that drivers can see around corners, the objects you’re looking at are relatively far away. To see distant images, you need a bigger image size. In order to produce bigger images, the mirror needs to be flatter. The more dramatic the curve, the smaller the image. The steeper the curve, the wider the field of view.

We learned that customers in Europe required a curvature that was far flatter than those mirrors that American manufacturers are accustomed to producing. Using the current standard process, it is impossible to manufacture to the specification of European roadway mirrors. The standard process can’t create such flattened mirrors without distortion around the edges and other imperfections, whether in acrylic or polycarbonate.

After two decades of manufacturing one way, we realized that our processes would have to adapt.

After many hours and days of brainstorming and testing, we actually discovered a new process that enables us to produce these relatively shallow acrylic convex mirrors at a lower cost than even our traditional North American mirrors. The process is still under development, but we have real reason to believe that we will be able to produce flat convex mirrors from acrylic to meet European road mirror specifications in the near future.

We have sent the first samples to customers in Europe and we will continue to perfect the process upon receipt of valuable customer feedback before moving to production. But something far more valuable than flatter mirrors came out of this new process discovery.

After realizing that procedural alterations could lead to improvements in cost and output, we re-examined our entire process to see where we could improve our manufacturing process with some basic retooling of machines, while still maintaining trusted quality.

After a forced adaptation led to a voluntary adaptation — we have been able to make convex mirrors using a method that is unique in North America and perhaps around the world.

Although our new process is a trade secret that we’re going to keep to ourselves, the point is that adaptation led to remarkable innovation, proving once again the old adage that “necessity is the mother of invention.”

Whether you’re making convex mirrors or devastating opponents with flying wheel kicks, adaptation is the key to remaining successful over time — and the proof is in the shipment of affordable, high quality American-made mirrors arriving in Europe.